Everyone Has a Different Normal 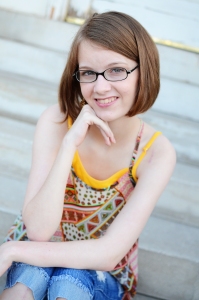 When Gracen Boxx was 16 years old, her parents sat down with her for a serious talk. With a spirit of openness, she accepted the news her parents shared with seeming ease. They told her that she had been diagnosed with a degenerative genetic condition called Autosomal Recessive Spastic Ataxia of Charlevoix-Saguenay (ARSACS). Among other things, this meant that she would one day need a wheelchair and that her speech challenges would intensify. Learning of her diagnosis simply confirmed what Gracen already knew in her heart. Her physical challenges would not get any easier.

Gracen understands what it means to have a degenerative condition because she has courageously lived it throughout her entire childhood. Gracen’s mom, Janet Boxx, shares, “I imagine most kids with progressive diseases struggle to accept the way their bodies disappoint them and Gracen was and is no different.” In Gracen’s words, “Having a skill and then losing it is like losing a part of yourself.” The idea of losing independence because of diminished skills is a very distant horizon that most young people cannot fathom. For Gracen, this distant horizon has become an ever-present landscape in her daily life. Gracen’s vulnerability in this landscape became even clearer when Gracen and her family were in a tragic car accident in December 2013. Gracen sustained physical injuries, but far more devastating was the loss of her two sisters in the accident.

Even though Gracen knew that her ability to walk would diminish because of ARSACS, she never anticipated that a car accident would require her to use a wheelchair while still in high school. This reality intensified her commitment to working hard in therapy. Gracen’s immense compassion and understanding of the obstacles some children face make her visits to Children’s Therapy TEAM a highlight of her week. She feels a strong connection with children confronting significant daily challenges. For Gracen, “Everyone has a different normal.” Time has not dulled the ache of missing her sisters, but such feelings have become more normal. Her challenges with ARSACS have become normal. Even her experiences with the pain of frequent migraines have become normal. She carries on. Therapy has enabled Gracen “to maintain what I have for as long as possible.” With so much beyond her control, Gracen’s ability to choose to work hard provides hope, even when life’s challenges seem unsurmountable.