Is Trust an All or Nothing Proposition? 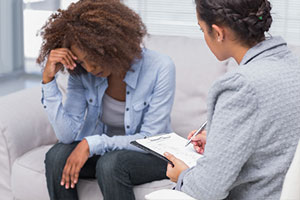 I reiterated to my grief counselor last week that I trust God for my eternal future and I trust that God will walk me through anything He allows to transpire in my life but that I don’t currently trust Him with my heart.

Ruth responded, “But is that really trust at all?”

I cocked my head to the right and looked her in the eye and proceeded to relate a very poor analogy in support of my position. You see, I knew I believed that trust, like faith, grows over time in every personal relationship, but I wasn’t really prepared with an answer to support my conclusion.

When my daughters were young, on occasion they would be afraid to go to bed fearing that they would have a nightmare. My husband, David, is pretty much a creative genius. He thinks fast on his feet (unlike myself). His immediate response the first time our oldest daughter told him of her fear was to tell her that it would be impossible for her to have a bad dream that night because it was “Free Dream Night”. I stared at him incredulously thinking, ‘What’s going to happen if she actually has a nightmare tonight?’

Free Dream Night was a security blanket of sorts for my trusting young daughters and the entire concept bloomed over time as questions began to surface such as, ‘How do you know it’s Free Dream Night?’ (Stupid they were not, but gullible . . . well, they wanted to believe in Free Dream Nights). My very creative husband bamboozled his way into a highly complicated and mysterious formula regulating Free Dream Nights by the common calendar. This concept was obviously way over the tops of my young daughters’ heads, but then it was nothing more than a fictional tale woven by a master storyteller; or more accurately by a desperate and misguided dad. 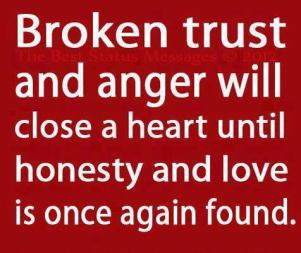 You have to know the day eventually came where David was confronted by one of his daughters who’d actually had a nightmare on Free Dream Night. David managed to successfully pass it off as an error reading that very complicated calendar. Fortunately, none of our three daughters were plagued by nightmares, but had that happened, their trust in their dad would have been damaged.

All of us trust in people and things to a certain degree. Sometimes we are not even aware of the trust we automatically offer others until it has been breached. Anyone who has lived for any length of time quickly learns that not everyone is trustworthy, and it’s devastating when we find the people we trust most have let us down.

Yet, the best cared for child still doesn’t fully trust their parents when fear is along for the ride. Picture if you will a young child standing on the edge of a swimming pool, his dad in front of him in the water encouraging the child to jump. For the young dare devil, this is no big deal, but for the timid child, it’s not hard to see the child doesn’t quite trust that their dad will catch them. 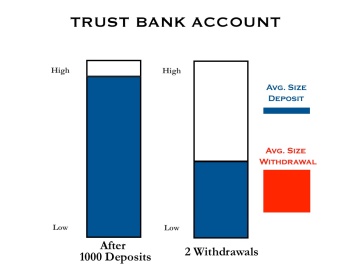 And sometimes, we break trust intentionally. We need that young child to be safe around water. We need them to learn to hold their breath, to kick and paddle their way to safety should they fall into a pool. So dad, after catching the child multiple times without letting their face go under water eventually lets his child’s head fall below the surface immediately pulling them back above water. The child learns that dad will still catch him, but he also learns he’s not as safe as he previously thought he was. Has the child lost all trust in his dad? No, he still knows his dad will feed him when he’s hungry but he isn’t as trusting the next time he stands on the edge of the pool and his dad beckons him to jump.

This is the nature of trust. We trust in degrees. We trust but verify either by asking questions or by taking risks. We start out small and take increasingly more daring risks as any given relationship grows. But we really don’t trust anyone completely – not even the Lord.

Trust in the Lord with all thine heart is an encouragement as much as it is a command. But that “with all thine heart” part trips me up a bit. I concluded on my own that it meant to the full degree of trust you have within you, but I imagine the more literal interpretation would imply that if you don’t trust fully, completely, 100% in the Lord, you will forfeit the blessing of having God direct all your steps. So, I turned to a John Gill’s Exposition of the Bible for clarification on that portion of Proverbs 3:5. After fully expounding upon what it means to trust in the Lord, Gill turned his attention to that one small but important phrase, “with all thine heart”, and this is what Gill concluded:

” . . . this trust in Father, Son, and Spirit, should be “with all the heart”, cordial and sincere. The phrase denotes not so much the strength of faith as the sincerity of it; it signifies a faith unfeigned. . . “

High five! Gill and I agree; he just said it better.

So yadda, yadda, yadda, after reading my analogies and checking in with Gill, I have to say, trust is not an all or nothing proposition. We trust with all the sincere faith we have within and the Holy Spirit fills in the gaps and directs our steps.

What say you in regards to trust?

← Another Birthday in Absentia
Present Tense →

7 responses to “Is Trust an All or Nothing Proposition?”