I had a biopsy Tuesday. I was a bit surprised when the doctor told me that I had handled the news that the biopsy was necessary in an appropriate manner – in other words – he was glad I didn’t freak out. This is the fourth time I’ve had to have follow-up appointments when the initial tests revealed unexpected results ATA (after the accident).

I find that ATA I am no longer shocked or surprised by disconcerting news. I’ve just adopted a low-level of expectation mixed with a high-level of resignation.

The nurse told me prior to the procedure that they do a lot of these biopsies and that a cancer diagnosis is very rare. My tongue-in-cheek response was, “Please don’t use that word rare. I’ve found that if it’s rare it happens to me.” Stillbirth is rare. ARSACS is rare. Losing two children in a car accident, while not unusual, is also rather rare among the population.

The biopsy wasn’t as uncomfortable as I expected in spite of finding that the pre-procedure medication hadn’t quite done the job it was designed to do. An additional step was required, which the nurse assured me was NOT a rare occurrence. The three of us, the doctor, nurse and I actually found a host of things to laugh about throughout the process.

As I left the clinic Tuesday afternoon I found myself thinking, ‘This is the most normal I have felt ATA.’ It wasn’t that I escaped the awareness of Bethany and Katie’s deaths. Nor did I forget Gracen’s disease and her prognosis. Those things are simply deeply ingrained in my being. They are ever before me. They have shaped me in so many ways. They color my perception of everything I see, hear and experience.

I don’t really know what made the interaction with my doctor and nurse different than all the interaction I have had with others ATA. Maybe. . . hopefully. . .  it reflects that a measure of heart-healing has taken place. I am both hopeful and wary of finding out if that will prove to be true.

It was a period of time in which feeling good (in spite of the fact that I was having a biopsy and all that implies) didn’t feel bad – didn’t feel as if laughing or smiling or enjoying simple conversation diminished the inherent value of my daughters. There was no guilt – no shame – and believe me I found many a reason to feel both of those things!

It was thirty minutes, not of escape, but of the assurance that there could and maybe even would be more moments like this. Moments when each one of my children is a joyful part of me, not simply a bitter or wounded reminder that life is not what I hoped, expected or dreamed it would be.

I fear I’m not describing these moments well at all, but suffice it to say that it was the first time that I discovered that living another day might not be so bad. That I might eventually enjoy life again. Not the naive existence I walked before Cole was stillborn, before Gracen and Katie were diagnosed, before Bethany and Katie died, before Gracen survived even as her health continues to deteriorate. No, it was a glimpse of what might be possible in spite of all those other things.

For thirty minutes of my life Tuesday . . . I felt free.

I felt for the first time as if God just might have some good plan for me in the here and now; not just my eternal future. Believe me when I say that I have long known intellectually that God cares about my here and now as well as my eternity, but it’s the first time I actually felt as if that was true. Finding any single occurrence where my mind and my feelings agree is huge for me.

For two and a half long years I have struggled to find a way to make my mind and emotions agree . . . and I’ve failed miserably. I honestly don’t think it’s something I have any power over. I think that’s the Holy Spirit’s job, so I don’t believe I’m a failure. I do, however, think the Holy Spirit is meticulous and that takes time – more time than I have the patience for.

So for now . . . all I want to do is bask in the thirty minutes of freedom I experienced. 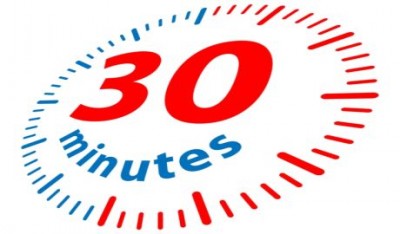 Those thirty minutes were worth waking up Tuesday.

Worth getting showered and dressed.

Worth having a biopsy.

← Girl, Who’s Your Daddy?
Questions I Ask & Thoughts I Ponder →