What Does it Mean to Suffer?

I was recently shocked to hear a fellow grieving mother express that she had to explain to someone that the pain she was suffering was not treatable by the ingestion of a Tylenol or Advil. And that one comment flipped a switch in my mind.

You see, although my daughter, Gracen, has Muscular Dystrophy and suffers from migraine headaches, I don’t think of her as sick. I guess I define sickness as a temporary condition. One that prevents an individual from going to school or work. A bacterial or viral infection that results in fever, requires bed rest, leads to weakness, pain and digestive distress. A condition that requires hospitalization or chemotherapy and radiation. That’s how I’ve always defined illness.

But in truth, my daughter is sick. She’s been diagnosed with a degenerative disease. It is silently and destructively at work within her body while she attends school, goes to therapy appointments, hangs out with friends, etc. Just because her condition doesn’t keep her in bed 24 hours a day or require hospitalization doesn’t mean she is healthy. She is in fact very sick.

Our culture appears to live under the same misconception in regards to the way it defines suffering. We seem to  believe that suffering is not suffering unless it includes physical pain. Pain can be treated with medication, surgery, different forms of therapy and a myriad of other medical interventions. And although mental and emotional pain can be treated with pharmaceuticals, those interventions don’t eliminate the pain, they just enable the individual to better cope with the anxiety and depression that often stem from the heart and mind. Therefore, mental and emotional pain (and let’s not forget spiritual pain) is not perceived by society as pain at all and as such is excluded from the definition of suffering. Mental, emotional and spiritual pain have basically been redefined and reduced to nothing more than the practice of wallowing in self-pity.

From my personal perspective, mental, emotional and spiritual pain are better described as the bombardment of multiple feelings that coalesce into anguish and torment. Grief is definitely intense mental torment and emotional anguish. A lot of situations result in that kind of pain alone. Does the lack of physical pain mean an individual isn’t suffering? Does the Bible say that suffering is only physical in nature?

We need only consider the example of Christ in the Garden of Gethsemane prior to His arrest to understand that biblical suffering includes mental, emotional and spiritual pain. In the garden, when Christ separated Himself from the disciples to pray, He literally sweat blood as He beseeched God to let the cup of His upcoming, arrest, betrayal, rejection, humiliation and fear of His impending beatings, crucifixion and separation from God to pass from Him. He was not in any physical pain at that point in time, but He was definitely suffering that dark night.

It’s not unreasonable or hard to imagine that God the Father is also no stranger to suffering. Can you imagine the mental and emotional anguish God suffered as He denied His son’s request to have the cup of suffering pass from Him? How must He have felt knowing that His sinless, perfect son would take on the sins of the world and be separated from their intimate fellowship for the first time ever? How must He have felt knowing the excruciating pain that awaited His beloved son? He surely suffered as He watched as His son was arrested then abandoned and betrayed by His closest friends. It must have hurt to watch His son hit, spit on, taunted and mocked as He was passed from trial to trial throughout that long night.

Can you imagine the torment as He watched as His son was whipped and struggle to carry His cross to Golgotha-His anguish as He looked on in horror as nails were driven through His son’s hands and feet, as He struggled to breathe hanging on that cross for hours and finally-finally hearing His one and only son cry out begging to know why He’d been forsaken by His father? Can you imagine the suffering? Could you willingly go through any of that with your child? God the Father was not Himself experiencing physical pain, but He was surely overwhelmed and tormented by suffocating anguish. 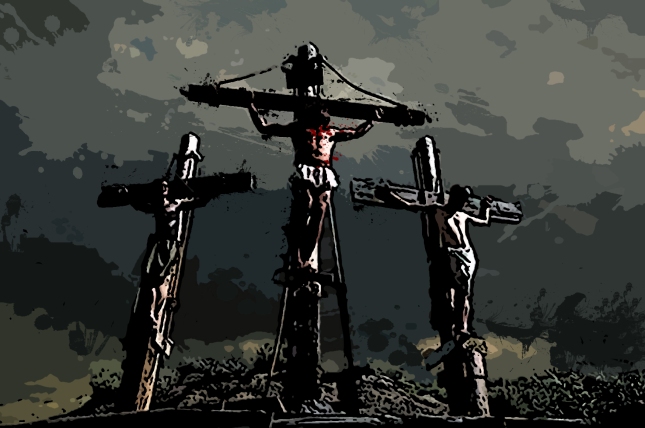 Neither God the Father, nor Jesus Christ discount or belittle the anguish and torment that results from mental and emotional pain. They both experienced it. They both understand it at the most intimate level possible.

Feel free to gently remind the naysayers of that.

The sufferings of Christ included agony and torment far beyond physical pain and when we forget that, we minimize the extent of His suffering for our souls. We devalue His sacrifice. We make Him less instead of exalting Him to the extent He deserves. And we repeat that slight over and over again when we refuse to acknowledge that mental, emotional and spiritual distress is in fact suffering.

I would not wish for any bereaved parent to remain in that raw state of agony forever or even that bone deep ache that lingers as time marches on but your heart stands still in the quagmire of grief. And I don’t think we have to either. I believe we will always live with the awareness that someone of great value is missing from our presence. Their absence will always linger in our conscious and subconscious minds. Yet I also believe that God binds up and heals our wounds. His word tells us that is so. We live with the scars, but the intense minute by minute pain recedes like waves hitting the shoreline. The tide continues to rush in with birthdays, loss anniversaries, family gatherings and celebrations and other unanticipated events that trigger intense feelings of sorrow and loss. But the tide will then recede allowing us to catch our breath, to relish memories of living life together, to rest in the hope of reunion, and to enjoy the good things and people that still surround us. I experienced it after the death of my son 24 years ago. I know it can happen for me again as the Holy Spirit does His work in my heart. He can work that miracle (could any loss parent describe it as anything else?) in the hearts of every broken believer too.

I think healthy grieving involves wrestling with God. As much as it is in your power to do so, ignore those who are blessedly ignorant and foolishly judgmental. Wrestle well with God. Don’t exclude Him from the process. Contend with Him! He is strong and loving and faithful and He grieves with us and for our broken hearts. He doesn’t condemn us for our anger and sorrow, instead He pulls up a chair and sits with us through it longing to draw us into His arms to comfort us. One day, I hope every broken believer finds themselves there, in His waiting arms, sobbing out their anguish and frustration and when the tears and shuddering gasps of sorrow release then I hope they will find their hearts to be safe in His care. That’s my hope for myself, for every bereaved parent, for every hurting Christian, for every lost soul struggling to put one foot in front of the other day in and day out after their cherished plans have been swept away.

← The Ultimate Decision
Spared for Salvation →

6 responses to “What Does it Mean to Suffer?”