This Body of Death 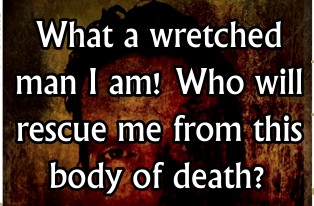 I feel like I’m sinking—sadness weighing me down—regardless of the medications I’m taking. Why can’t I overcome this? Is it possible that trauma causes bipolar disorder?

I just want to escape this body of death. That phrase, “body of death”, had little impact on me before—before my world imploded. Now, well now, I have an entirely different view of—and response to—that phrase. Now it’s way too personal, way too descriptive!

Every day I am bombarded with the visual representation of that phrase. I perform acts of service that reinforce those images. I cannot escape this body of death and I desperately want to. I want to flee from the future and the daily reminder that things are just going to get worse—lots worse.

But there is nowhere to go, nowhere to hide and the only means of escape available is one which further injures those I love, who frankly, have already suffered enough—more than enough in my opinion.

Somehow I have to learn to live with the cumulative pain and losses of the past while surviving the emotional erosion of the soul caused by daily care requirements, simultaneously bracing for and absorbing the blows each new and upcoming setback includes.

I can continue to put one foot in front of the other (although I’ve noticed it getting harder and harder to do; which concerns me) but I have yet to discover an emotionally heathy way to cope with this life I’ve been left with.

Distraction, distancing, withdrawal and emotional numbing may be effective coping mechanisms to prevent a complete breakdown but they are not healthy. They are nothing short of a delaying tactic that builds barriers between an individual and the people they love and later serves to compound the pain in the long run.

Those coping mechanisms are a completely normal and common human response to emotionally deep wounds, I’m told, regardless of the cause. They are not unique to my situation. But when consistently exercised they heap guilt, shame and despair on the heart as the individual becomes aware that they’ve lost precious, unrecoverable opportunities to spend time and deepen relationships with those they love in a conscious or unconscious attempt to protect their hearts from further pain. And that awareness, when it can no longer be avoided, is nothing short of agony. Time lost cannot be redeemed in this earthly realm.

Some time ago I questioned my daughter’s physical therapist about the potential benefit of a medical procedure that had worked well for another child in the clinic Gracen receives services from. The procedure involves creating holes in the overly tight muscles of the legs so that the muscles will stretch and enable more freedom of movement.

The PTs response was that the tension–the tightness of Gracen’s leg muscles are the very thing that enable her to stand. Loosening those muscles would make her legs noodle-like; unable to support her slight weight. 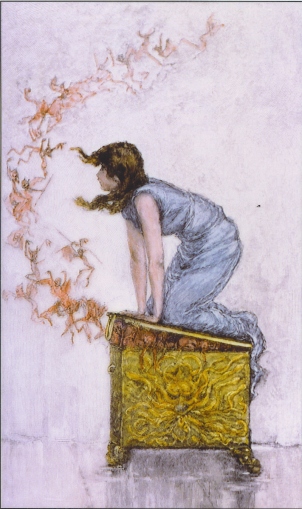 I am very much aware of the painful emotions that accompany my past and current life circumstances. When I find myself confronted with “negative” emotions, I don’t allow myself the freedom to experience and work through them. No, instead I distract my mind from them primarily via fiction (emotional numbing) locking them to the far regions of my heart. I am constantly aware of the existence of this metaphorically locked box of emotions, but I refuse to open and cope with the contents. Shoot, I’m pretty sure the contents of that box are under so much pressure that the slightest move to open the box (maybe my next effort to shove new emotional turmoil into the box) will result in the contents being forcefully expelled like an erupting volcano — an apt description as rarely does a volcano erupt without prior warning and I’ve experienced years worth of prior warnings. Warnings that the pressure is escalating.

The tension required to push those emotional realities away, to pack them into my own personal Pandora’s Box, is the tension that my emotional health is standing, or maybe in my case a better word is “balanced” or “teetering” upon. Like a car precariously balanced upon a cliff, one shift in weight forward without substantial counterweight will send the vehicle plunging over the cliff.

Opening Pandora’s Box is the means to healing I’m told, but it is a terrifying prospect. It will push me over the emotional precipice and I fear what that will mean, what it will look like; what living with it, living through it, will cost and what, if anything, will be left of the woman I once was. And worst of all, my greatest fear, will I be left in a recoverable state? 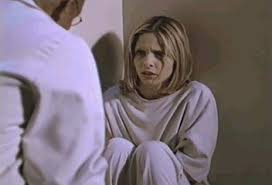 On top of everything that implies, opening Pandora’s Box only allows past emotional trauma to be vented. How then, in this new weakened and vulnerable state, do I cope with the ongoing trauma progressive disease constantly thrusts upon me? Where is my shield of defense when the communication device or the stander is delivered? How will I cope with the installation and use of a tracking system in my home, let alone the day when it no longer makes daily life less physically taxing for both Gracen and I, but when it becomes a necessity I must use alone in order to properly care for her?

How will I cope in a healthy way with the complications that arise from a lack of mobility: pressure sores, stiffening and less moveable joints, decreasing core strength that results in the inability to sit up from a prone position and maintain an upright position once seated? How emotionally strong will I be when verbal communication is lost and I can no longer hear the sound of my daughter’s voice? 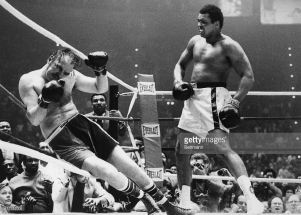 The boxer in round ten is less capable of withstanding a body blow that was thrown with far greater force in round one. The boxer’s split skin, bruises, and broken ribs don’t heal between rounds. He just rests, catches his breath, gets his cuts taped up and smeared with antibiotic ointment while receiving instruction and encouragement to continue the fight.

Is this not a picture, yet another metaphor, of the Christian life? God binds up our wounds between rounds, but the damage inflicted in the early rounds affects our ability to fend off and endure the blows taken in later rounds. Training, muscle memory and endurance developed prior to the fight are the believer’s  primary form of defense in the midst of the fight.

When the metaphorical boxer ignores the instructions, is unable to rest as adrenaline floods their system,  rejects the antibiotic balm and encouragement in the early rounds as young, brash believers are known to do, determined to “Do it My Way” as Sinatra sings, ineffective strategies are employed and more blows from the opponent successfully land escalating pain and weakening the cocky boxer.

Come the later rounds, desperate for the ministrations pridefully refused when the fight began, the beleaguered boxer attempts to tune his ear to those words of instruction. Humility has replaced pride and his brain, so distracted by pain and fatigue is far more inclined to seek and listen for the guidance of the Holy Spirit as we rest on the Cornerstone of our faith in dreaded anticipation of the sound of the bell that propels us back into the fray. And when the final bell rings we either find ourselves flat on our backs from a knockout blow or in the middle of the ring, beaten, bruised, and so fatigued that we can barely lift our arms in victory.

The bell has rung repeatedly in my life and I’ve been forcefully shoved back into the battle over and over and yet again. So weak, dreading the next blow that I know without a doubt is coming, trying to simply raise my arms to protect myself. Too tired to be effective, desperately attempting to put into action the instructions received in the corner, I huddle against the ropes frustrating my opponent and the audience who scream at me to step into the fight, defend myself, and destroy the enemy who contends for my faith.

What will be my fate when the fight ends? Will God step in and call the fight? Will I find myself stretched out on the mat breathing heavily but defeated all the same or will I be doing my best to hold my hands up in victory when the final bell rings?

Your guess is as good as mine!

I hope to be silently caught up in the air as God calls the fight or to hear the sound of the trumpet signaling the arrival of my Savior, rescuing me from this body of death and torment. But I fear I will continue to find myself stretched out on the mat breathing in the stale and bitter aroma of sweat and fear–yet another bout in my future, yet another beating to endure. Will I enter the ring the next time stronger and better equipped?

Will I ever find myself hands raised, a victor over the cares of this world?

2 responses to “This Body of Death ”