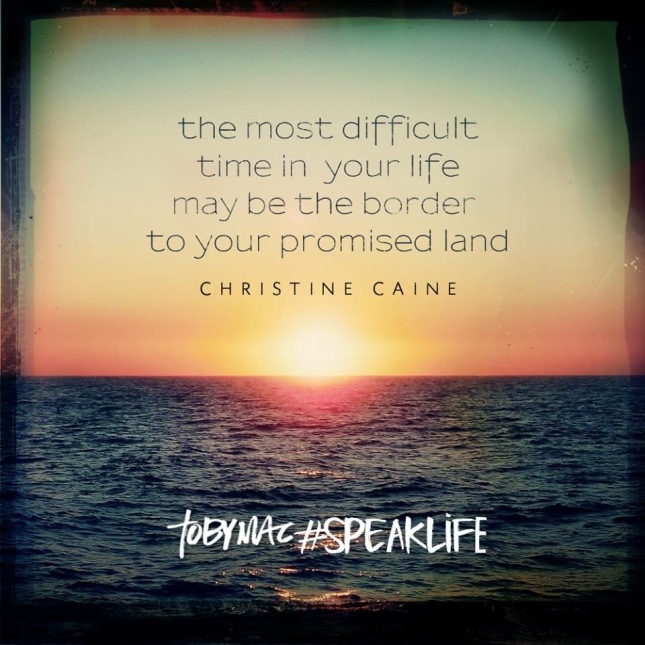 “The most difficult time in your life may be the border to your promised land.” This quote made me think. Really think.

I’ve spent the last year and a half (approximately) trying to live in the present following the most difficult day of my life. I know God has a plan for me, but frankly, only circumstances and my fierce love for Gracen are moving me forward and even then, only one day at a time. There are joys ahead . . . but . . . more sorrow also lies in wait. I don’t say that with a vague, abstract idea of the possibilities but from a position of knowledge, and therefore, I do not even want to think about, let alone plan for, anything beyond the immediate future.

Twenty-two days. I’m looking no further than twenty-two days down the road. And when those twenty-two days have expired, our family will be coping with yet another transition – another major transition. Right now we are simply trying to prepare for that transition, and let me tell you, it’s simply overwhelming. The plan is for Gracen to attend John Brown University at the start of the fall semester, 2015 – independently, without a care aid.

Take a minute to think about that – about what that might mean for me and what it might mean for Gracen. Don’t think about the emotional impact due to prior losses or a pre-mature empty nest, but instead try to imagine what kind of support and assistance Gracen has been receiving at home and from at least four physical and occupational therapists, not to mention the school nursing staff, aid and teachers who have come along side and made extra efforts to facilitate her success over the last year.

Is this the border of Gracen’s promised land? I hope so with all my heart but it will still be a challenging transition for my tenaciously determined warrior princess.

Is it the border of my own promised land? My perspective on that is far different. The truth is everything within rebels at the thought. I’m not entirely sure why although over-simplified pithy sayings like these may play a role: 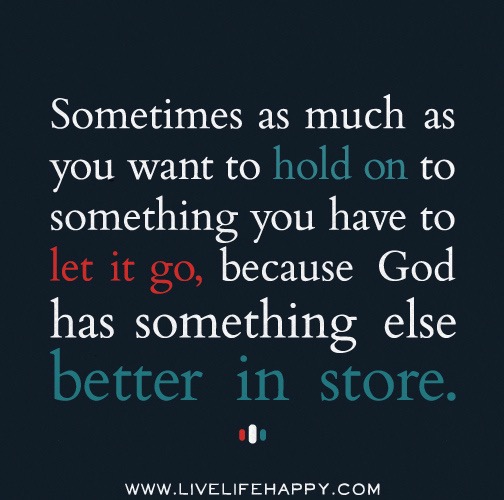 The idea that God has something “better” is an appealing one most of the time. It’s a very appealing idea when you lose your job or your boyfriend, or any number of common disappointments. We all want to believe that when we are rejected or overlooked that God has something better for us. And obviously, the promised land was perceived as something better, far better, than the wilderness the Israelites were wandering through. The promised land represented freedom, prosperity, home and security to the Israelites.

However, it’s a hard sell for me to accept that the loss of my children, anticipated grandkids and progressively deteriorating health are “better” for David, Gracen and I. (Are you starting to see how offensive these pithy sayings can quickly become to the deeply wounded?)

I feel as if we (humans in general) expect those better things referred to above to be worldly gifts. A job you enjoy more, a higher income, a man who loves you and treats you with respect, etc. However, it’s not always true that God provides a job you like better or that pays more. Sometimes the job you eventually get is not one you really enjoy, requires more time away from family and pays less than the income you had before. Still we assume worldly gifts when we hear or read one of the better than phrases, that is until it becomes apparent that a better replacement is simply not available. And then the better thing God has for you is spiritual maturity or a ministry you are now uniquely qualified for and with those come expectations from those who share your faith. 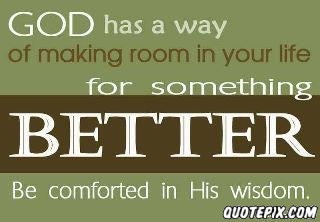 And while I understand that the spiritual maturity that results from being conformed into the image of Christ (through suffering in this instance) is God’s ultimate plan for me – and the resulting spiritual maturity is better for me from a spiritual perspective, that knowledge makes the idea that God has a better gift for me than the children I’ve lost, or the health Gracen previously enjoyed, no more palatable to this all too human heart.

On top of that, I’m not even sure that those pithy sayings are Biblical. Maybe the idea that God has something better in store is loosely extrapolated from the story of Joseph where he tells his brothers that what they intended for evil God used for good. If not, I guess I need some help finding chapter and verse for all those feel good sayings. I dare say the children God blessed Job with following the death of those he previously had, could never replace the unique relationship Job had with the ten he lost. They might have been a balm to his hurting heart and brought new joy to his life, but they were not better than those he lost.

What the Bible actually says is far more important to me than platitudes designed to make me feel better about hurtful things. Platitudes may make me feel better for a time but ultimately lead to further pain when they fail to play out. I much prefer hanging my hopes on God’s word of truth.

I also don’t believe God took my children from me in order to give me something better. Maybe I’m splitting hairs here, but I’ve always believed my children were a gift from God and implying that they were taken in order to give me a better gift also implies that God decided His initial plan for me wasn’t quite perfect and He decided to scrap that plan for a new and better one. I do, however, believe all the events that have transpired were part of His original overall plan for my life. And I chose to believe (because the Bible tells me so) that all of this will eventually result in something good despite the fact that I’m simply not feeling it at the moment. I imagine all the eventual good may happen in the “behind the scenes” places of our lives and David, Gracen and I may be completely unaware of it until we are made like Him – and isn’t that a cheerful thought?

Having said all that, this quote: “The most difficult time in your life may be the border to your promised land.” is not a comfortable one for me. I’m not saying it might not be accurate but rather that it maybe steps on my toes a little bit.

That quote makes me think (or maybe “realize” is a more accurate word) that I am far more like the ten faithless spies sent in to scout out the promised land than I am like Joshua or Caleb. And who wants to be likened to the ten faithless spies? I’m pretty sure I’ve never heard a message preached extolling the virtues of the ten spies who were afraid to enter the promised land. But countless messages have been given regaling Joshua and Caleb’s can do attitude. Maybe, more than being likened to the ten faithless spies, this quote makes me uncomfortable because the “promised land” reflects ministry to me in some corner of my mind – probably because I can’t identify a better thing that has filled or can fill the spaces of what’s been lost.

Whatever the reason, here I stand – not the virtuous Proverbs 31 woman who has no fear of the future, but instead just a very human woman who anticipates a less than bright future, standing with feet planted firmly in the moment, resisting the hand in the middle of my back forcing me forward into a future I never wanted, never anticipated, never dreamed of or planned for.

So no, I don’t want to step foot outside the current borders of my life in order to move forward into whatever comes after Gracen heads off to college – be that my personal “promised land” or not. I know that makes me a huge disappointment to many since I’ve repeatedly heard what a testimony our family has had, or can have. Why wouldn’t I want to embrace that future? To serve God in such a manner? To help and bless others with the lessons I’ve learned? How very selfish or ungrateful of me. After all, Christ paid it all, why should less be demanded of me?

The answer is complicated and not fully fleshed out in my mind. What I can tell you is that while others look in and recognize how painful this must be for us, their imagination falls far short of the reality of the anguish we’ve experienced and continue to suffer. In addition, I have counted the cost . . . I have walked through the fiery flames of anger and felt the flood waters of fear and sorrow spill over my head and I may have survived it all thus far, but I’ve certainly not enjoyed it and it diminishes a person in ways unfathomable for the heart and mind to comprehend or even explain.

Please also take into consideration that God never promised any of us personal safety. And while God is in control, and I can trust in eternal security and that God will be with me through anything he allows to transpire in the future, I have also had to face the stark truth that God was also in control when Cole, Bethany and Katie died. His sovereign control does not shelter me or anyone else from the grief and sorrow the loss of a loved one brings.

You may think I’m borrowing trouble by worrying about Gracen’s physical safety on campus or that my perspective sounds negative but the truth is I have very real things to fear due to the current status and progressive nature of Gracen’s disease. God’s sovereign control is not a consolation for me right now because I am well aware of exactly how much God’s good plans can hurt before the good part of His plans are realized in a believer’s life.

But, regardless of how resistant I feel to the idea that the promised land lays before me, I will take that next step, and the next one, and the one after that. If Gracen serves as the catalyst for taking that next step, instead of a the super-spiritual desire to please my Lord and Savior, that’s enough for now. Something better and the promised land can wait a bit longer while we face our next big transition. And maybe, given time, a little grace and mercy, one day I will feel less resistant to the concept of stepping into my promised land – but not right now. One reluctant step at a time is sufficient for now.